Sizes to Fit all Bicycles

"Not a bike leaves my shop without Mr. Tuffy or a recommendation for it - frankly it's the best thing on the road. At least 80% of the bikes we sell have Mr. Tuffy. I use them myself - one pair has outlasted four sets of tires and two bikes."

“To whom it may concern, I have been in the bicycle business since 1971 & you can believe it when I tell you that Mr. Tuffy tire liners are the best flat preventative I have ever used. I only sell about 500 bikes a year, but about 400 of them leave with Mr. Tuffy's. I guess what I'm trying to say is thanks, for a great product & keep up the good work.”

"We want to keep our customers riding safer, longer. They've invested several hundred of their dollars in our merchandise. We want them to be informed, and the chances of getting a flat around here in Tucson are good. If we don't, we lose the customer's confidence and future sales. And, the market has shown that the average rider is more interested in puncture prevention than fixing flats.”

"Mr. Tuffy has always been sort of a superhero for our customers - thorns seem to bounce right off them," said Mike Fischbein, owner of Bike Business in Yucca Valley, CA. "Now they're even better!" Fischbein also added that he prefers tire liners over liquid sealants because they don't damage spokes or make "a gooey mess" if the rider wants to change his tire.

During the almost three decades that Mr. Tuffy has been helping folks enjoy their ride without the worry of flats, many testimonials have crossed our desk. One was a remarkable letter from a young man who had ridden his bicycle across Africa. You can imagine the various roads and non-roads he had been over. He said that he was amazed to have only 3 flats on the entire trip, and none could have been prevented by Mr. Tuffy."

Other letters have recounted long trips or long periods of time without a single flat. Another stand out was one from a fellow who road the length of highway 5. From the tip of South America to the end of the highway in Alaska, he had no flats at all. 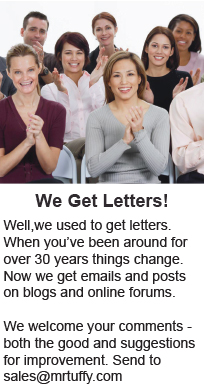